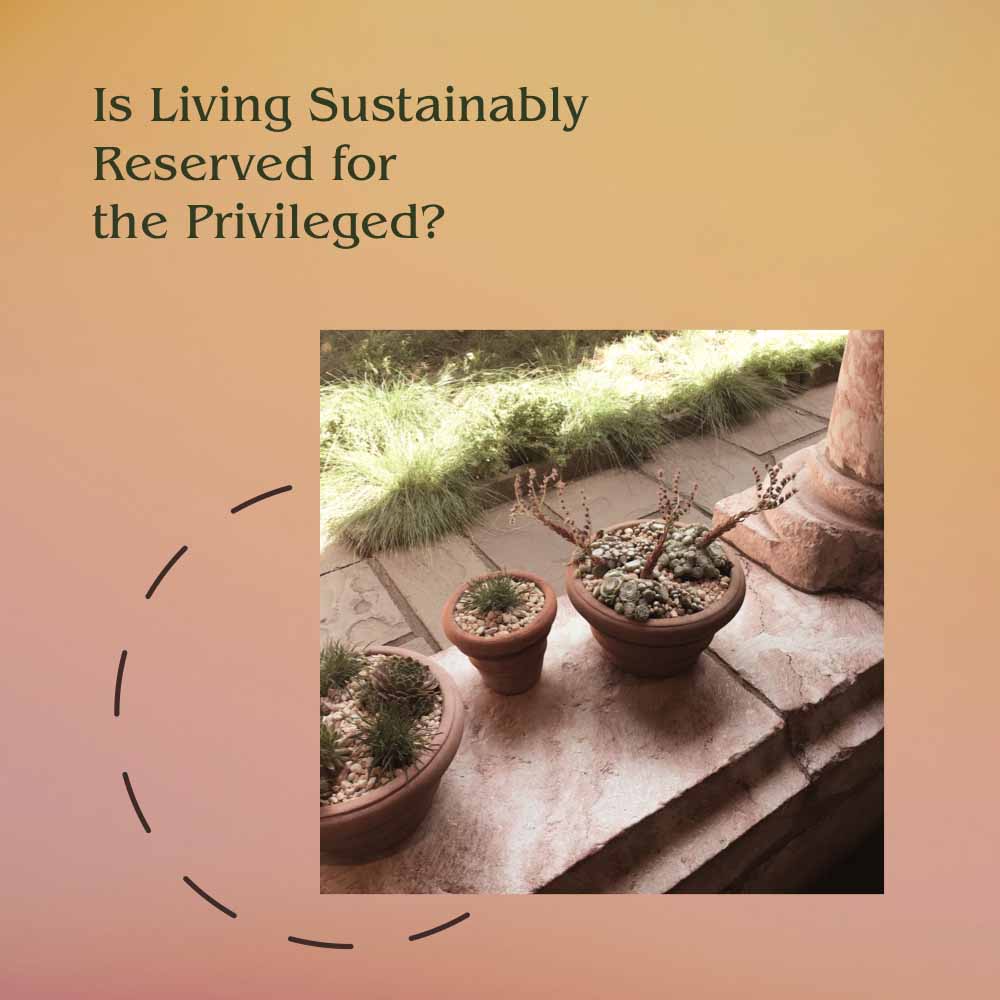 Is Sustainability a Privilege?

I have asked myself this question countless times: “Is sustainability a privilege?” I have not yet been able to settle on either a yes or no. Even after writing this post, a question mark might still remain.

Is Sustainability a Privilege?

There are several essential factors that enable me to live a consciously sustainable and vegan lifestyle.

The most important one is my own will, and I believe this must sound relevant to a lot of people. Willpower is probably the most critical force driving you to learn, think, and take action.

However, the other main elements depend on each person’s lifestyle, milieu, and circumstances, and that could affect the feasibility, speed, and approach related to each person’s sustainable lifestyle. Some examples that come to mind are:

Although all three are as crucial as willpower, sustainability can seem more doable if you are in a comfortable situation regarding those three factors above. WIth that in mind, I wonder if sustainability is for the people who are privileged.

For instance, one of the core components regarding sustainability is related to the environment. The images and footage of the Amazon fires this summer drew a lot of people’s attention. Plastic waste found in the bodies of fish that wound up on beaches shocked a large audience. Greta Thunberg’s courageous and powerful speeches amazed and woke up the world.

“We have to change.”

So, for the Earth that we all share, what can you, I, and everyone else do? At the global level, as well as the individual level, due to the gaps and differences in our lifestyles and situations, we have to acknowledge that our ideas on, perceptions of, and approaches to the situation would differ.

In order to adopt sustainability, I have made a lot of necessary shifts in my lifestyle. My focus is to lower the environmental impact of my daily choices and behaviors, and though most are very minor, they are still meaningful to bring about change.

As I looked for ideas on how to be more sustainable, phrases such as “the easiest sustainable tips you can start right now,” “super approachable sustainable swaps,” and “sustainable and money-saving ideas” were found everywhere on the internet and across social media. I personally don’t think they are false statements, as I have been able to apply those tips seamlessly. However, looking at the whole sustainability discussion from a global viewpoint, are they still really easy, approachable, or money-saving, and can they be started right now?

The main issue lies in how capitalism, and the countries that exploit capitalism, have put wealth ahead of the well being of the planet. Additionally, consumers that contribute to, and benefit from, the system are mostly on the relatively wealthier side, too. On the other hand, the ones suffering and who will continue to suffer from the environmental crisis are the world’s Third World countries, along with the lower-income/poverty classes in the First World.

In the U.S. particularly, there is data showcasing that there are more Black/POC people who are concerned with climate change, and feel the need for change, compared to other demographics. They tend to have lower incomes, and therefore are raising their voices not just for some lofty ideal, but for their own security and sanitary living conditions. This clearly demonstrates how those without privilege have been suffering from behaviors that are benefitting the privileged.

Reference:
Meet the Young Activists of Color Who are Leading the Charge Against Climate Disaster (Vox)
U.S. Income Inequality Worsens, Widening To A New Gap (NPR)

Therefore, in such an unbalanced situation, is it fair to expect that everyone, both the privileged and otherwise, should shoulder an equal burden when it comes to sustainability?

Human rights are another quintessential core aspect of sustainability. Let’s look at the fashion industry as an example. Poorly-managed workplaces, hugely insufficient wages, and a lack of even bare-minimum security and benefits are all commonly seen in sweatshops, and were illustrated in the documentary film “The True Cost” in 2013. The tragic incident of the Rana Plaza textile factory fire in Bangladesh featured in the movie was a dire warning to the world, and forced both people and businesses to pay closer attention to what’s going on in the industry.

These same fashion businesses that are exploiting workers are also notorious for contaminating the surrounding environment. When I watched another documentary film called “River Blue” in a Sustainable Fashion class at Parsons School of Design, my heart was broken when I learned that you can see what the trend color of the season is by looking at what color the rivers by throw-away fashion factories are dyed with.

It is therefore important to rectify the current system of sweatshops, to help those workers being unfairly treated while also protecting the environment.

However, the improvement needs to be implemented in an ethical manner. If it was led from the limited perspective of those industries in power, the voices of those most affected would not be heard. We have to remember that lower-income people can’t bear a huge and radical change, since they often live week-to-week or month-to-month and don’t have the luxury of long-term life planning. Any changes need to take into account these workers’ situations.

Fortunately, the market has been changing slowly but surely. Consumers have started avoiding the throw-away fashion culture initiated by the fast fashion business, as indicated by events like Forever 21’s bankruptcy and Topshop’s downsizing. Unfortunately, these market shifts have already had a huge and negative impact on the employment of the people who are dependent on the somewhat stable income provided by unethical business practices. With that in mind, it is crucial to reconstruct the business model carefully in order to protect both these workers and the environment.

This current unsustainable and unethical system brought wealth to a very specific group of people, businesses, and countries in the first place. Because the system is so rigid, adopting sustainable practices can have severe aftershocks to the workers at the very bottom of this pyramid if not done right. I can’t help but wonder if this inflexible situation was created intentionally by those at the top to maintain their privilege.

I’m a Tokyo native and have been living in NYC for seven years. I’m acquainted with an urban lifestyle where everything is accessible.

For instance, I’m much more used to reliable public transportation than driving my own car, which contributes to a sustainable lifestyle. But at the same time, I understand that it’s not the same for people living in suburban or rural areas where access to public transportation is limited. Simply telling people to use subways and buses more, instead of driving, can be me taking for granted the privilege of a well-developed urban infrastructure.

We can make sustainable shifts by changing our diet, too. People started paying close attention to how animal farming is conducted, and also to the greenhouse gas emissions that raising livestock generates. As a result, there is a growing number of vegans, vegetarians, and flexitarians, etc. However, the feasibility of dietary changes can depend on where you live. I am fortunate to have a wealth of choices when I eat out since there are many vegan restaurants and cafes, or places that have vegan options in NYC. It is easy to find not only fresh organic produce but also multiple plant-based milk and mock meat products. Also, tofu is widely available since the city has a large Asian population.

When you look at non-urban areas in the States, things are different. The tradition of meat-heavy meals plays a central role in the food culture of many areas. Food like hamburgers, hotdogs, steaks, BBQ, and chicken wings are all America’s good ol’ favorites. The more exalted this food culture is, the slower the spread of veganism can be. There is a chance that you only have one Walmart in the neighborhood that (1) takes an hour to drive to and (2) has only a very small plant-based line of products.

It’s not only in the States that there is a regional veganism gap, but also in Japan. Tokyo has a small but sufficient selection of vegan places, but when I visited Aomori this summer, a small city in north east Japan, I had no luck finding any local vegan meals and ended up buying a boring salad from a convenience store.

Despite this global lack of vegan options in rural areas, vegans have benefitted to some degree from the ubiquitousness of fast food. There have been more and more fast food restaurant chains that carry multiple vegan food options these days. While convenient in a pinch, we should all be reminded that such food is not healthy and the fast food business model itself is not sustainable.

Moreover, the previously-discussed topic of income gap isolates many in America from a diverse set of food options. There are numerous “food deserts” in many parts of the country. According to the Food Empowerment Project, “about 2.3 million people (or 2.2 percent of all U.S. households) have more than one mile away from a supermarket and do not own a car. ” Plus, this issue is “socio-economic: that is, they are most commonly found in Black and Brown communities and low-income areas (where many people don’t have cars).“

It is said that this imbalance in access is caused by gentrification led by the wealthy, which has raised the rent in previously affordable areas and consequently caused many local grocers to close. For people who live in food deserts, and lack easy access to affordable food, going vegan must be even more challenging. The overlap of wage disparity and the cost of local groceries reveals the stark separation between the privileged and the unprivileged.

Globally as well as locally, there is a huge difference in accessibility to, and speedy adaptation of, sustainability, which we have to remember is an issue of privilege.

Sustainability benefits the Earth and its people, and ultimately, myself.

While I consider myself to be healthy both physically and mentally, if I did have any health concerns, I would focus my time on my own issues. It is questionable and perhaps misleading to say that health is a privilege, but health is definitely a fundamental driver to act for a greater good. We really can’t compare and contrast personal issues and the global issues.

I truly encourage those who have health concerns to take care of themselves first, and then move on to larger issues when they can. By the same token, someone who is healthy can utilize their energy more proactively for the better planet.

Is sustainability a privilege? After all my considerations, I am still not 100% sure. The privileged situations that I discussed today may not truly be related.

However, the one thing I’m certain of is that there has to be a standardized system for both people who (seem to) have privileges and people who (seem to) have none, in order for all of us to live in a sustainable way. Without any changes from governments and businesses, the organizations that truly wield power, there is no way for us to overtake the speed of the current environmental crisis.

If living sustainably is a privilege, then it largely depends on governmental and industrial changes in order to balance out privilege and provide a fair game for everyone. We as citizens also have to be more mindful with our votes with regard to political power and purchasing power, and use them to voice our opinions.